Hello all!
It's been a little bit since I last got to update you guys, and a lot of things have happened. I'm excited to share with you guys that this fall, I'll be transitioning to the FOCUS staff team in Denton, back at UNT!! They're undergoing some transitions this fall, with their campus director, Matt, who used to be my mentor while I was a student there, moving to the dallas area to work on staff with our University of Texas at Dallas team. Since there was a need for another male staff member in Denton, after prayerful consideration, Nicole and I feel really good about committing to go up there and work at that campus for at least the next three years. It's definitely a bitter-sweet deal, Collin and Plano have both felt so much like home. I LOVE working with the staff team up here and with the students, so I'm really going to miss them and the environment up here, but I'm also so excited to bring what I've learned and grown in back up to Denton, and just super pumped about being back at the ministry that invested so heavily in me as a student while I was working on my bachelor's. God is gonna take care of us there, just as he did here. I'm confident in that in the midst of the changes that will happen over the next few months.

In some capacity, I've already started in denton. I'm meeting 1-1 weekly with  a peer team (group of guys small group leaders), so every Tuesday and Thursday I spend working at the Denton campuses, going to their staff meetings, and meeting with those guys, while still working the rest of the week back at Collin. Meeting with those guys in denton has been so, so good. I've been really enjoying it, and we've been talking a lot about their own personal 1-1 ministry with the students in their life they're reaching out to. I've been reminded in this season just how foundational 1-1 relationships are. That's the stuff that allows us to minister and be ministered to at such a personal level. Its easy to hide what's really going on and have a hands off mentality with church when we just go to group gatherings, but it's much harder to hide and not be personal when we spend consistent time with people in our communities 1-1. I'm so thankful God works through imperfect people in the midst of that.

Thank you guys so much for all of your support. There's no way this would be possible without it. Lives are being changed and disciples are being poured into because of it. I promise you its a good investment and I'm so thankful for it. 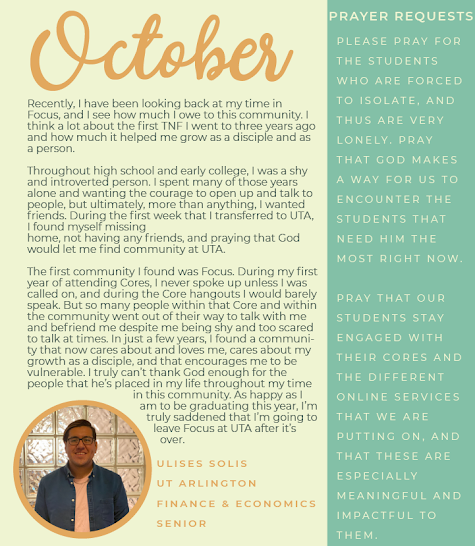 What Will be Happening this Fall?